What is the Difference between Molarity and Normality?

Molarity is the most commonly used method of concentration. It is expressed as the number of moles of solute dissolved per litre of solution. Therefore, the unit of the molarity is mol/L. Molarity is also known as molar concentration and is represented by “M”.

For example, a solution of 1M of sodium chloride dissolved in water has a molarity of 1M.

Converting from Molarity to Normality

You can convert from molarity (M) to normality (N) using the following equation:

where n is the number of equivalents

To illustrate further, molarity and normality of some acids and bases are given below: 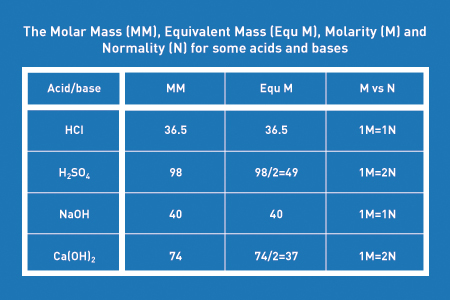 *Gram equivalent weight is determined by the amount of an ion that reacts, which could change depending on the reaction. Normality is not so straightforward as it will have different meanings depending on what you are dealing with: